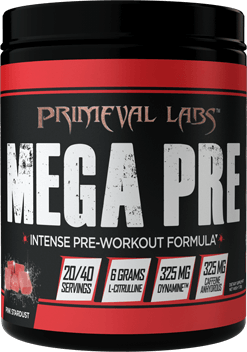 PRIMEVAL LABS MEGA PRE BLACK
Mega Pre Black is a high energy, high performance pre workout designed for the hardcore athlete who commands the utmost from their body. Including 11 well-dosed, transparently-labeled ingredients, Mega Pre Black supplies the mind and body with everything it needs to perform to its best.*Mega Pre Black synergistically combines powerful CNS-activating compounds alongside researched-backed nootropics, nitric oxide boosters, and performance enhancers to create a pre workout that delivers on ALL fronts -- pumps, performance, endurance, and energy.*With Mega Pre Black, athletes no longer have to choose between a hard-hitting, high stim pre workout and a “performance” pre workout.*
MEGA PRE BLACK AT A GLANCE
MEGA PRE BLACK UP-CLOSE

One of the few “proven commodities” in the supplement industry, beta alanine increases levels of carnosine, a powerful intracellular buffer.*

Found in beets, betaine (a.k.a. trimethylglycine) has been shown in research to enhance performance, strength, power output and lean body mass due to its ability to support endogenous creatine production, serve as a methyl donor, and improve cellular hydration.*

Precursor to the “learning neurotransmitter” acetylcholine that supports memory, focus, and the highly important “mind-muscle connection”.*

The consummate pre workout stimulant, caffeine anhydrous is the first of two forms of caffeine included in Mega Pre Black. As you know, caffeine is a potent CNS stimulant that also prompts a strong release of dopamine, resulting in increased energy, focus, stamina, and determination.*

Dynamine is a next-gen neuro-activating compound that enhances energy, mood, and focus WITHOUT affecting sleep.* It is faster acting than TeaCrine, and makes for an ideal inclusion in a pre workout designed to deliver intense energy, focus, and motivation. *

TeaCrine is a chemical cousin of caffeine found in kucha and coffee that does not increase heart rate or blood pressure. TeaCrine promotes smooth, long-lasting energy that keeps athletes dialed in, energized, and focused.*

elevATP ® is a patented combination of ancient peat and apple polyphenols shown in research to increase endogenous levels of ATP.* elevATP supplementation may support improvements in strength, power, and performance in resistance-trained men.*

To further up the energy and focus of Mega Pre Black, we’ve also included an additional 68mg of Infinergy (dicaffeine malate), a slow-releasing form of caffeine that promotes smooth, long-lasting energy.* 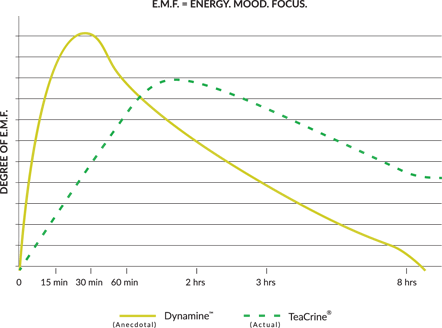 Directions For Mega Pre Black: Take 1-2 scoops of MEGA PRE BLACK in 6-8 oz. of cold water. Start with 1 scoop to assess tolerance prior to moving to the 2 scoop serving size.

Warnings: Read entire label and obtain clearance from a licensed healthcare practitioner before use. This product is to be used by healthy adults only. Do not use if you have or could develop any medical condition or are taking any prescription drugs. Do not use if you are pregnant, nursing, or may become pregnant. Do not use more than the recommended dosage. Discontinue use and consult a physician if any adverse reactions occur. Keep lid tightly closed and in a cool, dry place. As with all supplements, KEEP OUT OF REACH OF CHILDREN AND ANIMALS.

You must call us during our normal business hours for a return authorization and instructions from one of our customer service representatives prior to returning any merchandise. Merchandise must be returned at your expense in unopened and perfect condition in order to receive credit. We do not allow any nutrition bars or the like (cookies, brownies, etc.) to be returned for credit. We do not accept returns on opened products. A return authorization must be given or we may refuse the package. A 10% restocking fee will be applied for returns. Refunds for returns are typically processed within three business days upon receiving the returned product. No product returns will be accepted after 30 days.Sales TaxWe are based in Florida therefore, we must collect a 7% sales tax on the product subtotal for any order shipped within the state of Florida.Shortages/Mis-ShipmentsOn the rare occasion that we may ship you an item other than what you ordered, do not open the product or it will void your right to return it.Because of our double-checking packing system, we have a minimum amount of errors. On the rare occasion of a shortage, please thoroughly inspect the box a second time for the product(s). If the product(s) still cannot be found, or if any other problems exist, contact customer service within 24 hours of receipt of the shipment for correction.Freight Forwarding Shipments:1st Nutrition is not liable or responsible for any losses, damages, or delays due to the actions or inactions of third-party freight forwarding shipping services. We are only responsible for shipping the products to the designated address.